It was wonderful to meet the team again, and we’re all very eager to get going on this journey adapting to Scrum.

I’m staying for two weeks, and at the end of the workshop we will do our first real Sprint Planning meeting. And from that point on, there’s no turning back. Bridges are burned and new ground is to be discovered.

Discussions on our roles was on the agenda. The Scrum Master and the Scrum Product Owner role is pretty much clear. But the one team-member with the biggest challenge is our QA. Since testing has a bit of a methodological turn-around when adapting Scrum. One of the pit-falls we encounter is that within each sprint, we fall in to the waterfall-method, and basically we’re back to square one. Scrum is about team-players, so even the developers must start to think differently, not only passing code for testing but doing part of the testing themselves.

Still, I believe that the QA still has a crucial role in every team. Though the role is very much re-defined in Scrum. So this is a part we need to discuss more in the days to come.

We had a brainstorming of the different user-roles that act and relate to our system, and there were quite a few. The question that was brought up was: when defining a user, should we consider a user as a persona with (potentially) different access or entry-points to the system, or as a persona with specific motivation and presumptions when accessing the system? The latter can help a user story to be more clear on the rationale for the user story. But it can generate a big list of users. So we combined the two viewpoints, and cut it down to a manageable number of user roles.

The next days we will spend figuring out the size of story points, and start to write user stories, play some planning poker, simulate a sprint, and do estimations. So the wall will be filled up with post-its by the end of this week.

BTW: today’s Norway’s national day (May 17th). Celebrated it at the embassy, and had a ‘piece of Norway’ for some hours, with cake, ‘pølse med lompe’ (hotdogs in a potato scone), games, singing and folk dancing. Great day. 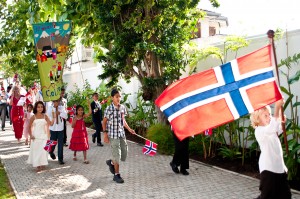