5 skills you should embrace to be a productive office worker 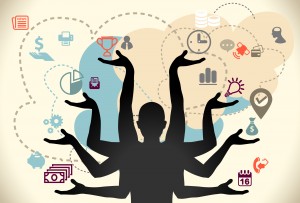 6 years of studies and 15 years as an office worker. Nearly all these years (except for the few first years as a student), the computer has been an essential tool to increase efficiency and productivity. I still have a lot to learn, since technology is constantly evolving, offering us still better tools to use.

What surprises me, though, is how little effort many office-workers are in the use of the tools at hand, and the lack of engagement to maximize the use of them.

Personally, over these years I have earned great dividends in investing time in the following skills:

When servicing in the military, I attended a correspondance course in touch. And learned touch on my Brother AX-10 type writer (yes, with correction tape). Wow, what would I do without having that skill in my fingers! When I was drafting this blog on a flight, using my iPad, I really got a feeling on how inefficient I was writing with two fingers (since iPad really doesn’t work with touch). It hit me how slow I was writing, and how similar it was to many office worker’s way of handling the keyboard. I’m estimating I was writing 4-5 times as slow.
The best thing about touch is that you can look at your screen while typing, and with practice, the speed of your fingers pretty much keeps up with your mind. And it makes this skill a vital asset.
I’ve given my kids a bonus if they learn touch. It should be as essential as learning them to read.
2. Learn the shortcuts
I see it too often: the user starts the browser. The default page (which is of course totally uninteresting and not changed) is shown. The user clicks in the URL field. The URL is marked, but the user clicks at the end of the URL and clicks backspace – one character at the time – to remove the address. And then starts typing the new URL, including «http://…»
Most applications have a help-page that displays shortcuts. Print them. Hang them up, and learn the basic ones. It’ll save you loads of time.
3. Read the manual
I know. Only geeks read manuals. But geeks are often more productive. So why not once in a while scan through the manual or use the help function – or use Google! – to learn the tool you are doomed to sit with for hours and hours.
4. Control you e-mail
Countless blog post are written on how to control your e-mail. Personally, I’m a fan of GTD (Getting Things Done) and embrace the system developed by David Allen. For many, it’s a massive move to do the shift. But I believe that you have to have some kind of a system to keep track of your obligations and be an accountable employee. And to ensure that you have the correct focus.

I have a colleague who has more than 30.000 emails in his inbox, whereof 3000 are unread. And I believe he is not alone. E-mail has gone from a productivity enabler to become a productivity disabler.

5. Fight against reactiveness, for proactiveness

It’s a constant challenge. So often I come to work in the morning, and if I don’t take control on my priorities for that day, someone else will. And you end up firefighting, and the sense of getting nothing done. Know the feeling?

And once you go down that lane, the actions you do are more based on who or what screams most against you, not what needs the necessary focus. It’s a mode. And it won’t let go.

So you need to take control, and find methods to do this